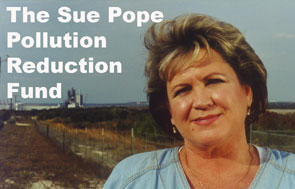 In 2000, despite intense pressure, the Midlothian rancher would not agree to allow the company’s local cement plant to double its capacity without a public hearing. When her objections were overruled and the plant became a huge source of illegal new pollution, her stubbornness was finally rewarded.

Not only did the company have to install new pollution controls; not only did it have to pay for a staff scientist for Pope and her group, Downwinders at Risk, to use for unscheduled plant inspections at Holcim. It also had to put aside $2.3 million dollars for new clean air projects in DFW.

12 years and dozens of grants later, that $2.3 million has all been spent – on things like hybrid school buses and delivery trucks, solar panels in South Dallas, energy efficiency projects in Fort Worth, public transit in Arlington and electric lawnmower trade-ins.

The only thing left to do to close out the largest and most successful endowment of its type in the state history is disburse the interest accumulated over the life of the Sue Pope Pollution Reduction Fund. That will happen today when, according to the specific wishes of Pope herself, $75,000 will be donated to the Special Needs education program in the Midlothian public schools. It’s believed to be the largest single donation to the MISD from a local resident.

“The reason I got involved in clean air issues was because of the children,” said Pope. “In the 1980’s, I began to hear of so many Midlothian area children with rare diseases and birth defects like Down Syndrome and Autism. When we started connecting these problems with local industry, I decided that something needed to be done about it.”

In a ceremony at the L. A. Mills Administration Building 100 Walter Stephenson Road scheduled for 4:45 Monday, Pope will present the check to the Midlothian School Board, some members of which were still in public school themselves when she began her crusade for clean air in the 1980’s.

Whether or not they acknowledge Pope’s original motivation, the Board is reportedly happy to accept the money that one woman’s stubbornness and – thoughtfulness – has brought them.