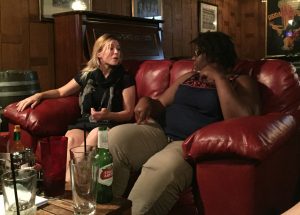 Reception at Bryan Street Tavern beginning at 9:15 pm or so

Despite their similar backgrounds, upbringings, and generations of living in the same city, it took the established Dallas families of Michelle McAdam and Clarice Criss almost 100 years, and Downwinders at Risk, to get to know one another.

Even though the two women had the same proper white gloves-and-pearls Dallas grandmothers, the same bourgeois background, even the same debutante “dip,” their families didn’t socialize. Until January of this year, they had never met, or even heard of one another.

Which is really hard to believe when you see them together now. They behave more like sisters than recent acquaintances. At least sorority sisters. Which they kind of are – only from different chapters.

Michelle is an SMU coed from one of the most established and respected families in White Dallas. Clarice is the granddaughter of the founder of Dallas’ oldest Black-owned newspaper. They had pretty much the same upbringing. Only all the people at Michelle’s milestone events were white and all the ones at Clarice’s were black.

And so, after almost 100 years, what did it take to bring these mirror images of Dallas High Society together under one roof? Natural disaster? Lawsuits? Business dealings? No….A class on how to be bigger Pains-In-The-Butts to the Powers-That-Be: The College of Constructive Hell-Raising.

Michelle and Clarice have practically been inseparable since comparing notes at an informal after-class social hour in January. They attend events together. They’ve introduced their families to one another. They go shopping. They’re plotting local political strategy. All because these wayward granddaughters of their respective aristocracies decided to take a five-month class that promised to teach them to be more effective troublemakers.

Each was already primed. Michelle does front line refugee work as part of the International Rescue Committee. She notes: “Granny had plans for me to marry a nice Harvard graduate before becoming a housewife with 2.5 kids in Preston Hollow, but I was always more attracted to the misfits who weren’t afraid to forge their own paths, ask questions and challenge the status-quo.”

You should probably know “Granny” is 92 year-old Ruth Sharp Altshuler, who, as one of Dallas’ leading philanthropists has met a pope, and more than a couple of presidents, much less served on the SMU Board of Directors. She established the Women’s Foundation.  She was hand-picked by Henry Wade to serve as Dallas County’s first female grand juror…to hear the indictment of Jack Ruby.

But she’s also the grandmother who told Michelle, “To whom much is given, much is required.”

“I think Clarice and I were drawn to the class for this reason. We believe we have been given the knowledge, experience, and connections to be a force for positive change in our community.”

Meanwhile Clarice is not exactly following the Deb path to success either. She’s up to her elbows in South Dallas urban agriculture and self-sufficiency projects. Her great uncle was the late William Blair Jr., founder of The Elite News, the oldest black-owned newspaper in North Texas. She admits her family is “Black Royalty.” She signed-up for the College because she wants her community to be taken more seriously by its elected representatives. “I won’t stand by and not hold people accountable.”

As to why they’ve hit it off as instant companions, Michelle says “We both have a warm, friendly, humorous nature. I can also relate to her unfiltered commentary in public! She isn’t afraid to provide her opinion and neither am I.”

To watch this just-like-me-but-still-unlikely pairing joust and joke with each other on their way to becoming BFFs is just one of the great stories emerging from the first class of the College of Constructive Hell-Raising. There’re at least 13 others – one for each student who took the leap of faith and signed-up for the first semester of organizer training ever offered to DFW residents. 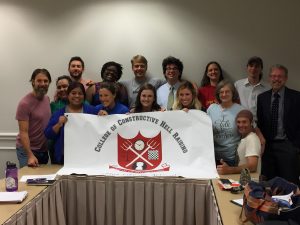 The class has been meeting since January, not only officially, but afterwards in the same informal confab at a local tavern where Michelle and Clarice began discovering their similar roots. In the process, the would-be community organizers have formed a very real sense of community with their peers. Some bonds seem so natural, it’s like they were there are along. Others are based on similar interests about issues or campaigns.

And all of them will be in the spotlight  tomorrow when they graduate with their degrees in hell-raising in our first graduation ceremony. Instead of a single commencement speaker, we decided to have 15.

We’re going to close the door to the Meadows Conference Center Gulf Coast Room at 8 pm, travel forward in time 20 years and let this first class tell us how the lessons they learned at the College have impacted their lives since they graduated.

Don’t worry, we’re bringing everyone back for the reception at the Bryan Street Tavern starting a little after 9.

If you feel overwhelmed with the cacophony of bad and worse news. If you feel frustrated at the stifling of progress taking place. If you’re pessimistic about the future. We have a remedy. Come listen to these “First 15” talk about their plans and plots tomorrow night.

Don’t be afraid of the future – come meet it firsthand. We promise you’ll be inspired.

Posted in College of Constructive Hell-Raising