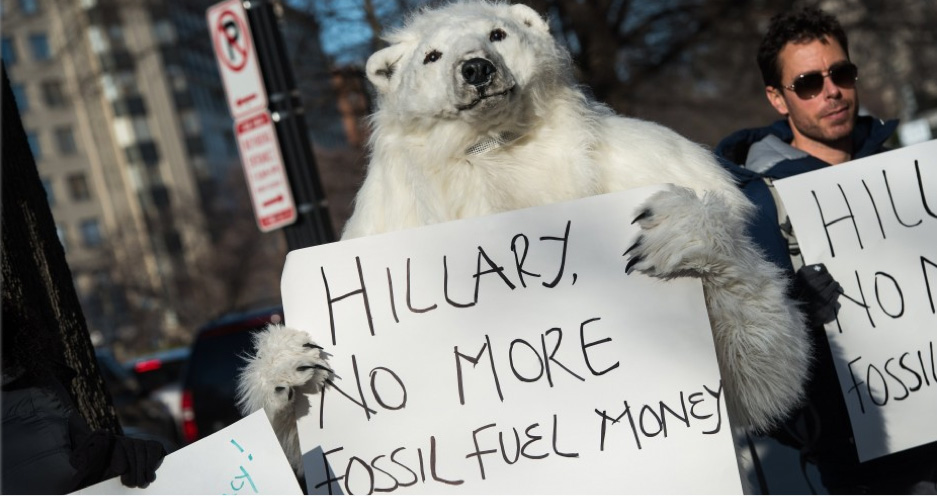 For those among us who were fighting the good fight in the 1990's, the prospect of a Hillary Clinton presidency is met with some trepidation.

It's not just that Bill's terms were filled with more promises of change than the actual thing (see WTI incinerator). Or revisiting triangulation as a political strategy with its unsatisfying half-measures. Or the fact that Hillary's time as a corporate lawyer for the most powerful interests in Arkansas resulted in all kinds of of conflict of interest, odd bedfellow situations for a "progressive," including being a member of the the board of the LaFarge Corporation when they began to switch from coal and gas as a fuel for their cement kilns to hazardous waste.

No, it's the knowledge that a certain just-good-enough ambivalent green rhetoric will be applied for public consumption to spin a script where all the actors and actions will already have been decided in advance to serve a larger political goal that you can only guess at and will have no chance of influencing. The first Clinton Administration was a good example of the old adage, that for environmentalists, the real difference between Democrats and Republicans is that you get more meetings with Democrats. There were lots and lots of meetings for those eight years, full of sound and fury, signifying almost nothing.

Say what you will about President Obama, but because his 2008 victory was at the expense of a lot of the Party machinery that had backed Clinton in the primaries, his ascendance allowed for more room for non-elites to influence decisions up and down the line. Nothing illustrates that better than the appointment of Al Armendariz, an unassuming apolitical professor of engineering for most of his life, as the Region 6 EPA Regional Administrator by the equally unlikely choice of Lisa Jackson as EPA head. For a brief shining moment, the choice of grassroots environmentalists was taken seriously. Instead of party hack or corporate "environmental lawyer" you had a real practicing environmental engineer directing policy in what is arguably the most important EPA region in the country.

That's unlikely to happen in a Hillary Clinton administration. Instead of an Al Armendariz, look for a Ron Kirk or equally entrenched local Democratic Party establishment figure. It's just the milieu that she, and her advisors, feels more comfortable in.

With the anti-science faction of the Republican Party in control of both the House and Senate, there's no question that such a choice is preferable to one made by a Republican President Rubio or Bush. But like anyone else, environmentalists would like to vote for someone instead of voting against their opponent out of fear of the alternative scenario.

The groups want firm, on-the-record commitments from Clinton, hoping to hold her to green promises later in the campaign and, should she win, as the next president.

So far, they've gotten few explicit guarantees. Clinton has famously declined to say what she thinks of Keystone, and in the run-up to her announcement, she has said little about other environmental issues as well. Indeed, Clinton has kept largely quiet on most policy issues, save for the occasional Twitter post or statement. But for environmental groups looking for a Democrat to champion causes they're sure Republicans won't, the lack of explicit policy guarantees is worrisome.

"Clinton has got to tell us what she stands for," said Bill Snape, a senior counsel with the Center for Biological Diversity. "If we're going to be asked to trust her, then she has to verify where she stands. That's all we're asking, and she hasn't yet delivered."

The moves are part of a delicate, codependent relationship between the candidate and the environmental movement.

Green groups need Clinton (or any other Democrat) to beat the eventual GOP nominee, lest they find themselves with a president totally at odds with their stances. But they can't afford to offer unconditional support for fear that the candidate will not prioritize their issues amid the sea of Democratic causes.

There's no doubt where all of this is headed. The groups will come around because they have no choice. Clinton will concede some popular positions that she can afford to take. But the lack of a strong primary opponent this time will give her lots of wiggle room.

We're still more than a year and a half away from election day, but Clinton fatigue is already setting-in among a lot of older environmentalists. Get those PowerPoints ready.