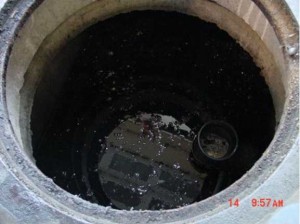 That's Texas Supreme Court Justice Paul Green blurting out an unfortunate truth even as he was trying to defend an injection well that's being sued for trespassing into groundwater under an adjacent rice farm in Liberty County near the Texas gulf coast.

The Texas Tribune's Jim Malewitz has the scoop on a so far mostly over-loooked case that could set some important precedents about land rights and underground contamination. How do we know? Because the oil and gas industry told Maelwitz:

In 1997, Environmental Processing Services finished drilling an injection well about 400 feet from FPL Farming’s land, which the farm contested early on. Since then, the company has injected more than 100 million gallons of wastewater, gradually expanding the well's underground footprint.

The well in question is labeled Class I and used for nonhazardous industrial waste. It is not one of the 50,000 Class II wells that drillers typically use. But lower-court opinions have drawn no distinction between the wells. That has stirred concerns among oil and gas producers that a ruling in the farm’s favor would complicate efforts to dispose of drilling waste, thereby stalling production.

As Malewitz points out, the case raises the questions of "just how far below the earth’s surface do property lines extend? And can someone trespass on another’s property — more than a mile underground?"

Since it's close to the coast, the farm's groundwater is too salty to drink now but the farm's lawyers argue that desalinization technology could render the water useful. They say regardless of its salinity, it's a resource and a piece of private property that's being poisoned by the well's waste stream that includes the flammable liquid acetone.

Now you may think the waste well operators, "Environmental Processing Services," would deny any contamination of the farm's water as a first line of defense. But as it turns out everyone in industry and the regulatory agencies believes that after you've pumped 100 million gallons of industrial waste down a hole 800 feet deep, it will tend to "migrate" outside the fence line of the well itself. So what kind of arguments are EPS's lawyers that the Texas Supreme Court is finding so persuasive?

1) Our waste may be migrating, but since we can't go down there and check, you really can't conclusively prove that it's under the farm…yet. All you have is an industry-government model that everybody uses that says it has.

3) Even if it is polluted by our waste, maybe that same desalinization technology the farm wants to use to make the water useable will also be able to filter our industrial waste out if it.

Of course, these equivocating arguments in court by lawyers are a far, far cry from the air-tight assurances Texans get from the industry spokespeople or slavishly pro-industry elected officials, who GUAR-AN-TEE that no fracking waste injection well could ever contaminate groundwater.

Really. You should go read the article. The lawyers are making lots of money on this one. No timeline for a ruling.