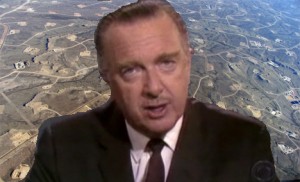 When the gas industry is losing the editorial board of the Fort Worth Star-Telegram, is it a sign it's losing the PR war in the Barnett Shale?

While Sunday's editorial in the Star-Telegram, titled "Texas Railroad Commission can’t just tippy-toe around quakes" falls far short of a wholesale condemnation of urban injection well operations, it does castigate the Railroad Commission for being promoters of fracking while also being assigned to regulate it on behalf of the public good, and faults it for failing to provide any new facts to the debate at its disastrous public meeting last week in Azle.

Is the three-member commission doing anything to separate facts from speculation and theories?

“In addition to taking the residents’ comments into serious consideration, Commissioner Porter has been in communication with the state geologist in regards to a potential study by the Bureau of Economic Geology,” Porter’s news release said. “Railroad Commission staff is also participating in a work group formed by the Environmental Protection Agency, which includes representatives from the United States Geological Survey and other state regulatory agencies.”

There’s “serious consideration,” a “potential study” and a “work group.” Sounds like tippy-toeing.

In fact, there is a considerable amount of science linking disposal wells, which push millions of gallons of drilling waste into rock formations deep under ground, with “induced” earthquakes.

A report posted in July described one study by USGS scientists. The results were also published in the journal Science.

The rate of quakes increased to about 100 a year in the central and eastern U.S. in the three-year period from 2010 through 2012, up from an average 21 a year from 1967-2000, the study showed. The increase coincided with a rapid increase in oil and gas drilling using hydraulic fracturing, which leaves large amounts of waste water for disposal.

In many ways, the developments in Azle last week represent a bigger threat to the industry than residents' December victory in Dallas over a more protective gas drilling ordinance. It's deep in the heart of the urban Shale instead of being at its edge. It's a spontaneous grassroots revolt led by people who probably voted for Ted Cruz instead of Paul Sadler in 2012. Its participants have lived with fracking for almost a decade now instead of fighting off an invasion as in Dallas. These are folks who are more likely to carrying a concealed weapon than a Sierra Club membership.

It's also true that both industry and government have been caught off-guard by the issue of injection-well earthquakes and are unable to bat down the arguments the way they can with harms that take more time, and have more subtle causal links, like cancer. Empirical evidence makes the case pretty plain, as the Star-Telegram editorial admits. Denials by industry in the midst of earthquake "swarms" centered on injection well locations seem like the environmental equivalent of a reassuring "Baghdad Bob" show while the bombs are falling in the background.

Do the circumstances taking place in the western part of the Metromess represent a new front on the fracking fight in North Texas, or just a momentary rise in tensions that will be gone by the Spring? A lot depends on whether the pace of earthquakes that gave rise to the Azle meeting keep occurring. Thirty of them have been recorded since November alone and if they keep showing up at that rate, there'll be little need of community organizing meetings to get people motivated to do something. The question is what that something is.

A prohibition on injection wells within Standard Metropolitan Areas? Within certain population densities? Within proximity of water wells and infrastructure? A moratorium on any new wells anywhere? Is there and answer that can help the people in Azle and maybe others in the Shale at the same time?

Time will tell whether last week's meeting is a real turning point for facts on the ground, but it's already clear that it marked a milestone in terms of perception. And as we're often fond of saying here at Downwinders, perception is everything.