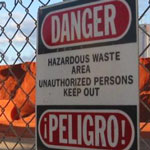 Yesterday, Frisco Unleaded announced it was launching a community clean-up campaign to spotlight the city's indecision about submitting a claim to bankruptcy court covering the entire bill for a complete clean-up of the Exide site. We're having our first event on the Square, Saturday, November 9th.

In response to reporter's inquires about our objections, the Austin-based  "environmental attorney" the city has hired finally admitted what the Mayor and Council have been afraid to say out loud to its own residents at the last two council meetings – that the City is poised to approve the siting of a new permanent toxic waste dump in Central Frisco to bury the Exide waste instead of a complete clean-up.

The reason for this decision? Because it's better to have the waste buried in Frisco, next to people, schools and parks, than to transport it to a more isolated  licensed landfill designed for the disposal of hazardous waste.

Think we're joking? Go read the article yourself. This is what the City is saying:

"I strongly believe the city is in a much better position to control its liability and protect the public by maintaining control of that waste in the long term right here with the proper remediation and containment mechanism than it would be to haul it to Oklahoma or Colorado  orto some other hazardous waste landfill where it's then mixed with everybody else's waste and you become liable for everythingat that site."

We hardly know where to start in replying to this absurd argument, but let's try. with our own….

10. You admit there's substantial liability in disposing of Exide's waste. But you're willing to impose that liability on your own residents here in Frisco, at a location never designed to be a toxic dump that's near neighborhoods, schools and parks, rather than transferring that liability to a more isolated location outside of Frisco designed for the job of burying hazardous waste. Thanks so much for caring.

9. And you're relying on Exide, the state, and EPA to monitor and maintain this new toxic dump site for the rest of eternity? Just like they did for the site the first time around as a smelter? What could possibly go wrong?

8. Apparently you've only looked at the costs of 30 years of monitoring and maintenance at this new toxic dump. Why stop at 30? It doesn't get any less toxic with time. This thing is permanent.

7. You say you're very concerned about the liability. What's the liability for a catastrophic accident that sees toxic lead waste pouring into Stewart Creek going through Grand Park and residential neighborhoods along the way to Lake Lewisville?

6. Will the landfill meet all the modern EPA requirements, or will they have to be exempted from some because of their location and circumstance? In other words, are you building a state-of-the-art facility, or something less? Ah, you don't know.

5. Has the City performed some kind of secret risk assessment  regarding the hazards of building a new toxic waste landfill for Exide's waste in Frisco vs. disposing of it in a licensed landfill that's already built? We didn't think so.

4. So your attorney says the City of Frisco ALREADY has equally liability regarding the waste at Exide. How exactly is that going to affect the City's financial obligations?

3. Has the city compared the cost of decreased property values and property taxes that a toxic landfill would create vs. the economic  benefits of a complete clean-up of the Exide site?  And you call yourselves Republicans?

2. Can you point to any city, especially one of Frisco's caliber, that has actively recruited a hazardous waste landfill to feature in its city center, upstream of it's biggest park? We'll wait for an answer.

1. If burying lead waste in place isn't such a big deal, why didn't Dallas seek that kind of solution in West Dallas with its numerous piles of battery chips and slag? Instead, they dug it up and hauled it out.


So….West Dallas got a better clean-up than Frisco is going to get? Interesting twist.

What You Can Do:

1. If you haven't already, please send a quick prepared e-mail to the City Council telling them you don't want a new toxic dump in town. You can add your own comments too.

2. Please make your voice heard at the City Council meeting next Tuesday, November 5th at 7:30 pm at City Hall. This dump will happen unless there's the kind of hue and cry there was about the smelter continuing to operate.

3. Come to our Community Clean-Up on the Square on Saturday November 9th from 10 am to 2 pm where you can get free lead testing, educate yourself about this situation, pick up bumper stickers, sign postcards to the Council, and show your support for a complete clean-up instead of a toxic dump.

4. Use our new website devoted to this dump issue – www.nofriscodump.com and our Facebook page to keep in touch with the latest developments.

5. Get more involved. We know you thought this was over when the smelter closed. But it's not. Don't let the city council create another disaster at the Exide site. Only Frisco residents can stop this dump.