For over a year now, Downwinders and Frisco Unleaded members have been urging the City Council and regulators to treat Exide's on-site "non-hazardous waste" landfill as a hazardous waste dump. Our characterization was based on the evidence already in the files, combined with Exide's own track record. But a new round of discoveries validates our conclusion.

Those violations include samples taken from the closed parts of the "non-hazardous waste" landfill that turn out to be extremely hazardous. The particular cells sampled contain waste from operations as far back as 1998. That means we're looking at thousands of tons of illegally-disposed hazardous waste where there wasn't supposed to be any at all.

Exide has been arguing that any discrepancies between the toxic contents of their landfill and its "non-hazardous waste" designation was a recent problem because of a bad treatment recipe. Turns out, not so much.

In fact, after taking samples from the still-open parts of the landfill back in Spring, the state found they too violated toxicity standards. Reportedly, the TCEQ engineers have been trying to recreate Exide's "treatment process" without any success. Looking back over all the (post-closure) test results, the truth is that that "treatment process" probably never worked in the first place.

The September 28th violations also include open piles of lead slag waste on the edge of the landfill itself and stacks of 2-ton "superbags" of lead waste slag lying around various parts of the smelter site – all testing at hazardous levels for lead and other toxics, and all completely unauthorized as hazardous waste sites.

Among the most mysterious discoveries is that Exide sent over 3,300 tons of this same lead slag waste to be buried at the huge landfill in Lewisville at the corner of 121 and I-35 in May of 2012.

Exide labeled the waste "non-hazardous" as it went through the landfill's gate, but that label wasn't correct. Exide didn't adequately test the waste for cadmium, despite knowing the waste could easily test positive for the toxin. There is now going to be a whole chapter of the Exide clean-up taking place in Lewisville.

You can read the very dry TCEQ inspection report on the City of Frisco's website here. No word yet on fines or punishment. You can read the Dallas Morning News coverage here. 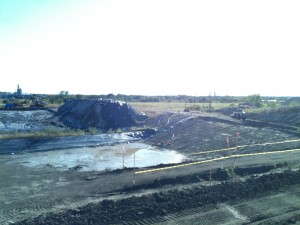 Now that it's official that Frisco has a hazardous waste dump, the City Council must decide by December 9th if it wants to keep that dump permanently, or dig up and haul off its toxic contents. That's the day the city must put in its monetary claim to the judge overseeing the Exide bankruptcy case.

This summer the city hired a consultant that gave it two options for dealing with the Exide site in case the company could not pay for the  clean-up, which now appears likely.

The city could ask for $25 million to be set-aside for a 40-acre permanent toxic waste dump surrounded by a mile long "slurry wall" to keep the content from leaking out into Stewart Creek and Grand Park. Tha's the "Kia" option.

Or it could ask for $135 million to be set aside for a clean-up that would dig up all the waste, haul it off to a licensed hazardous waste landfill, and leave the property fit for commercial development and green space. That's the "Cadillac" option.

Even though it's probable that Exide won't have the money itself to finsih the clean-up, it's important for the Council to publicly take a stand for the complete "Cadillac" clean-up of Exide. A landfill would pose a permanent risk to both Stewart Creek abd Grand Park. Financing the plan without using Exide money will be a challenge, but then so was buying the company out and closing it down, and putting together the package that recently brought the Cowboys training facility to Frisco.

You can click here at our Citizen Action of the Week page to send a read-to-go e-mail to the Frisco City Council requesting they choose the comprehensive "Cadillac" option, You can also add your own comments too.

Besides finding massive violations in and around its Frisco landfill, the Texas Commission on Environmental Quality and EPA have also recently rejected Exide's proposed clean-up of the smelter property.

Among the largest issues was disagreement over the classification of groundwater flowing underneath the Exide site, which straddles two forks of Stewart Creek and sits in the steam's natural valley.

Both the state and EPA are insisting that the flow of Exide groundwater is so high that the entire property should be held to stricter clean-up standards – 100 times better than what Exide was proposing. This is also a standard that Frisco Uneaded and Downwinders has been pushing for.

Other issues in the rejection include the demand by the agencies that the company also address contamination in Stewart Creek, the appearance of mysterious barrels of toxic and long-ago banned PCB's, and more investigation of what kind of fill the entire complex was built on (hint: it might be the same stuff that's also going into the "non-hazarous waste" landfill).

In all there are 34 separate items that the state has given Exide to change, report on, follow-up, or sample. The TCEQ's rejection letter can be accessed  and downloaded through the City of Frisco website here.

This is all good news. Frisco Unleaded has been arguing that the entire Exide site should be cleaned-up to levels that would allow residential and green space use.

On the other hand, it might all be academic because of the fact that Exide is in bankruptcy court. We'd have a standard but no money to get the job done.

That's why the decision the council makes on December 9th is so important. It must decide to ask the bankruptcy court for the amount to cover either a permanent toxic waste landfill in downtown Frisco forever, or a clean-up that will leave the site available for prime real estate development.  Please send the City Council a message that you don't want them to be cheapskates with public health.