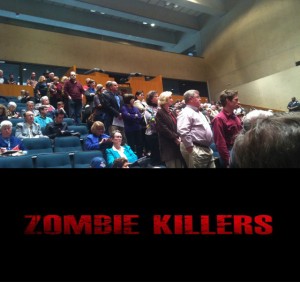 With any luck, this will be the last reminder from us about how you can make sure the Trinity East just-won't-stay-dead "zombie" gas permits in parklands and floodplains are never approved by the City of Dallas. Because today, Wednesday, August 28th, we're going down to City Hall. line up to take our turn at the podium, and watch them get buried for good.

We're gathering at 12:30 pm on the 6th floor of City Hall just outside the Council Chambers to pick up last minute materials. Join us then or as soon as you can make it down. Mayor Rawlings could decide to take up the three Trinity East permits right after lunch or put it off until after other business. Likewise he could allow everyone that wants to speak on the issue 2 minutes a piece to do so, or he could limit both sides to 15 minutes a piece, os something in between. So be prepared to improvise.

This is an historic vote. It's the first time the Dallas City Council has actually been asked to give a thumbs up or down on a gas well permit.  It comes after nine months of contentious debate that made gas drilling in Dallas the most important civic battle in recent memory and hastened the departure of former City Manager Mary Suhm after discovery of her infamous secret agreement to work with Trinity East to subvert current city policy in order to win approval of the permits.

Time and again, Suhm and Mayor Rawlings contorted the system to try and get the permits through. First, they scheduled the Plan Commission hearing and vote on the permits on December 22nd of last year hoping no citizens would show-up. That didn't work and the permits were denied by a narrow margin. So then the vote to deny was subject to an unusual "reconsideration" vote by the Plan Commission with no public hearing. That attempt to roll the denial back also failed when the Plan Commission voted for a second time to deny the permits.

That denial is why we don't even need a majority of the 15 council members to agree with us . We only need four opponents to the permits to block the super-majority needed to override the Plan Commission. It looks like we have them, but we still need you front and center speaking out and filling up the council chambers.

In just a month, this same city council will be getting the final draft of a new gas drilling ordinance from the Plan Commission and considering what to do with it. Give them a show of force today that will stick with them as they consider their course of action.

And after today's vote, come on over to Lee Harvey's and celebrate with us. And we promise you'll never have to read another alert about these thing again.