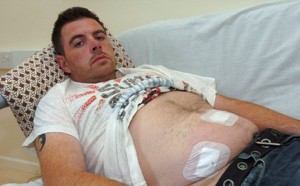 According to CBS News

"A new study published July 10 in The Lancet showed that even breathing low levels of air pollution for a prolonged period of time could raise risk for the often-deadly lung disease. Another study released on the same date showed that short-term exposure to most major air pollutants could increase the risks of hospitalization and death from heart failure."

Lung cancer risks went up 18% with each increase of 5 migrograms of PM 2.5. Researchers noted that they did not find a level of pollution for where there was no risk, and the results indicated "the more the worse, the less the better" when it came to pollution.

"At this stage, we might have to add air pollution, even at current concentrations, to the list of causes of lung cancer and recognize that air pollution has large effects on public health," Takashi Yorifuji from the Okayama University Graduate School of Environmental and Life Science and Saori Kashima from Hiroshima University in Japan…."

All of that is kind of old news – put stuff in air, see stuff harm your lungs and heart. But here's a new "adverse health effect" being linked to air pollution – appendicitis. While not as lethal as lung cancers and heart attacks, anyone who's had their appendix rupture can tell you it's not a pleasant experience.

And while ozone may not have been linked to heart problems in that previous study, the New York Times reports a Canadian one links it to a slight increase in your chances of having appendicitis.

High ozone levels were associated with an increased number of hospitalizations for appendicitis and were even more strongly associated with cases of burst appendix. For each 16 parts per billion increase in ozone concentration the scientists found an 11 to 22 percent increase in ruptured appendix cases. The study was published in Environmental Health Perspectives. The associations persisted after controlling for age, sex, season of the year and the presence of other air pollutants, like nitrogen dioxide and particulate matter. The reason for the association is unclear, but studies in mice have shown that air pollution can alter the animals’ abdominal bacteria.