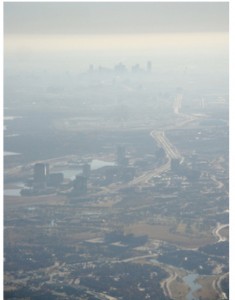 It's unfortunate the Dallas Morning News chose to drink the Kool-Aid and say, that despite DFW once again getting an "F" from the American Lung Association for its smog levels, it "isn't as bad as it looks" because the air is "getting cleaner" than it was in…1999.

And 20 years ago too probably, but what about compared to, say, 2010? In that more relevant comparison, the answer would be no, the air is not cleaner, it's in fact dirtier. The average concentration of smog has inched up over the past two years and the number of monitors in violation of the old 85 parts per billion ozone standard has increased from 2 to 7 in 2011 and 6 last year. That's not progress.

The DMN story also doesn't mention that the state has tried and failed twice with its "clean air plans" to reach the obsolete 1997 standard, and it forget to say we face a 2018 deadline to meet the new 75 ppb standard. But don't worry because the air is cleaner than it was in…1999! Even if it's still not safe or legal.