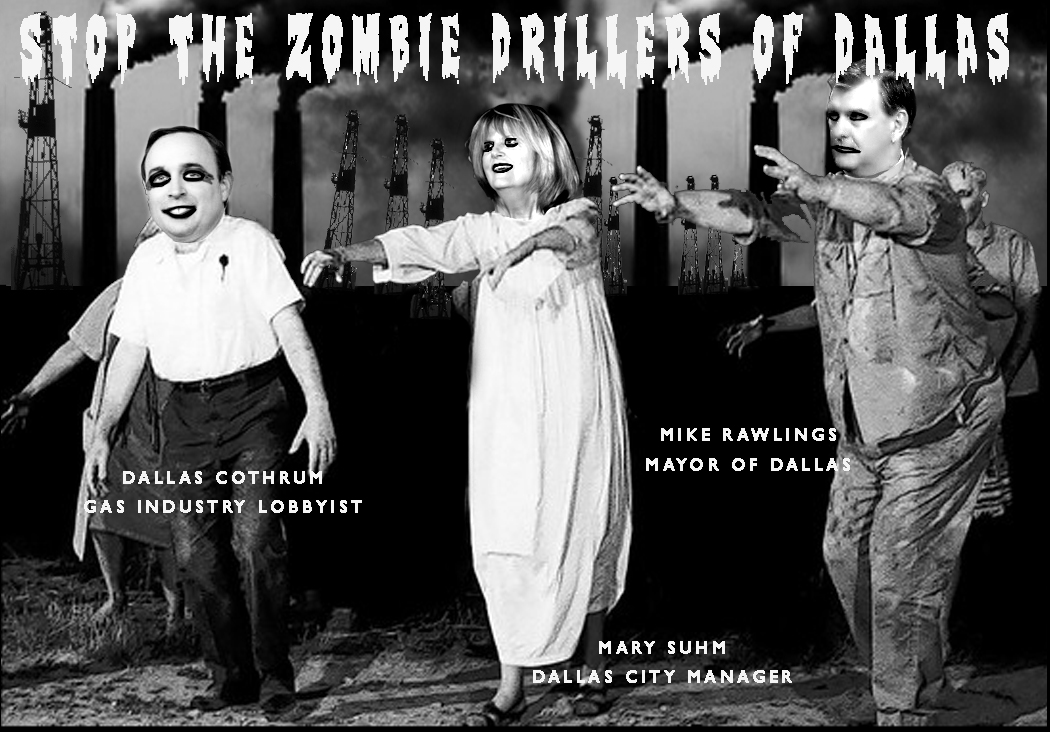 Here's the full text of a letter that was sent to all Dallas City Plan Commission members last week:

Despite the request to the City Council made by members of the Commission on February 7th to change city policy in order to accommodate the Trinity East gas permits by your March 21st meeting, there has been no effort to do so.

For this reason alone, we urge you to take no action on these permits next week, or uphold your December 20th denial. These permits would allow surface drilling on park land and in floodplains, contrary to current city policy.

However, information and circumstances that have come to light since the December 20th vote to deny these permits make them even more objectionable.

We know that the proposed Trinity East processing facility and compressor station will be at least the 10th largest source of air pollution in the city, with a strong probability that emissions would grow to be much greater, out of the regulatory reach of the City of Dallas as they grow.

We know that city staff is working to locate this large air polluter next to the new Elm Fork Athletic Complex, in direct contradiction to recent city staff and City Council actions to protect the area around the Complex from lesser air pollution threats.

We know that, despite the title of the facility itself, the scale of operations, and the equipment it proposes to install, city staff refuses to classify Trinity East’s “Luna South Gas Processing Facility” as a gas processing facility under current City of Dallas zoning law.

We know that Trinity East misled the CPC at your February 7th meeting when its representative told you that gas well casings always protect underground aquifers. In fact, Trinity East had a casing failure at a previously undisclosed well in Irving, only a few miles away from the proposed Dallas sites, and with the City of Dallas participating in the lease agreement.

We know that on January 10th, Trinity East representatives told the Commission that its processing facility and compressor station would handle only the gas from its three Dallas sites—despite its Manager stating in published interviews that it was the centerpiece of a larger regional plan that incorporated Trinity East wells in at least two other cities.

We know that the city staff has a conflict of interest in performing an unbiased due diligence of the Trinity East permits because the City Manager had already pledged to support approval of the permits in a previously-undisclosed 2008 agreement. This is the reason there has not been a comprehensive review of the environmental and public health impacts of these permits by the City of Dallas staff, as there have been for other proposed polluting facilities in the same area as the Trinity East sites.

We know that a complaint has been filed with the Dallas County District Attorney’s Office alleging possible Open Meetings Act violations leading up to the January 10th CPC meeting that could make a second, “reconsidered” vote on the Trinity East permits illegal.

We know that a vote to approve these Trinity East permits is a vote condoning five years of the public, the Commission, the Park Board, and the City Council being intentionally mislead by the City Manager concerning the circumstances of these specific sites. It is perhaps the most important vote you will cast as a City of Dallas Plan Commissioner.

If you do decide to take a second vote on the Trinity East permits at your March 21st meeting, we request that you adopt special public hearing procedures that will guarantee a Dallas resident’s right to speak.

Based on the experience of the Commission’s February 7th meeting, the CPC format of 15-minutes per-side is clearly not adequate to allow everyone who wishes to give testimony on this high profile and controversial issue to be heard.

Because the CPC only meets during weekdays, many of us take off from our jobs or home responsibilities to attend. Our time should be respected. When a government entity announces a public hearing, it should be willing to listen to everyone who makes the effort to attend and speak. You owe us that courtesy.

The only time citizens have become angry during CPC meetings has been when they were completely shut-out of any opportunity to provide public comment (January 10th), and when public comment was shut down prematurely with many dozens of speakers still lined up to give testimony (February 7th). We make no apology in standing up for our right to speak out.

To avoid future frustrations, any definitive vote on the Trinity East permits taken on March 21st should be preceded by an inclusive, open-ended public hearing that gives each person their say. Toward that end, we propose that the CPC adopt the City Council rules for public hearing and allow everyone who wants to testify a total of 3 minutes each. The hearing would remain open until the last person spoke. Commission members would still be able to ask questions of specific presenters. This offers freedom of speech without sacrificing any of your tools to elicit further information from the participants.

We know that some of you must be as frustrated as ourselves in having to revisit this issue time and again, but there is a way to definitely put it to rest. Let the December 20th denial of the Trinity East permits stand.

Thank you for your consideration.