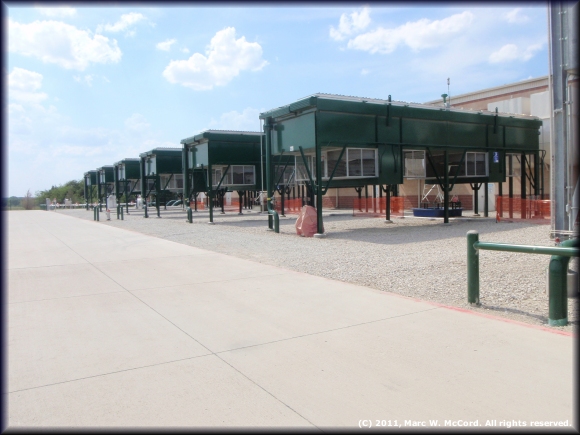 If you're a Dallas resident and you want to find out more about the kinds of new facilities that might be located near you if gas drilling is allowed in your city per the new ordinance the Council is debating on August 1st, here's a item of interest from West Virginia, where operators are already fracking.

"Sulfur dioxide, carbon monoxide and formaldehyde are some of the chemicals Chesapeake Energy is likely to pump into the air in Ohio County from its numerous drilling sites, company information states.

Earlier this year, Chesapeake officials confirmed plans to build local compressor stations that may release these and other chemicals into the atmosphere. Now, the company is identifying "potential to emit" levels for several potentially hazardous materials from its well drilling sites.

In addition to the pollution from the well sites, Chesapeake also will release emissions from its local compressor stations. Chesapeake, in a legal advertisement earlier this year, confirmed the "potential to discharge" the following amounts of these materials on an annual basis from the operations at the compressor stations: carbon dioxide – 93,800 tons; nitrogen oxides – 82.96 tons; carbon monoxide – 16.87 tons; methane – 86.64; carbon dioxide equivalent – 95,667 tons; benzene – 0.33 tons; and formaldehyde – 3.22 tons."

Formaldehyde and Benzene are both carcinogens. Carbon Dioxide is the primary greenhouse gas pollutant, and methane is right behind. Nitrogen Oxide is the primary component of smog in DFW. All this – 93,000 tons a year of air pollution –  from just one gas compressor. Where in Dallas would you propose to put a facility that spews that much air pollution? And how would you keep it from adding to the chronic air quality problem the City already has? And then what about the fact that the operators might not need just one, but three, or five, or ten of these compressors in Dallas? It's not uncommon to build complexes that house as many as a dozen or more locomotive-size compressors in the Barnett Shale, which includes at least the western half of Dallas.

When you allow drilling, you're allowing everything else that follows drilling, including compressors and their pollution, storage tanks that leak copious amounts of the same kind of pollution, pipelines that can use eminent domain to run through your front yard, and a host of other hazards, some of which we know about, some of which we no doubt have not yet discovered. Gas mining is not conducive to neighborhoods or attracting new, non-polluting development. If Dallas City Hall doesn't know this now, it most certainly will learn it later.