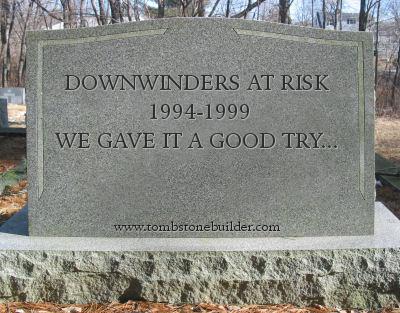 By all rights, there shouldn’t be a Downwinders at Risk around anymore.

The life expectancy of a local grassroots group rising up to fight a bad permit is a couple of years if you’re lucky, twice that if you’re extremely lucky.

We’re beginning our 23rd year. Throughout that time, we’ve ridden our share of organizational roller coasters and still managed to disembark with our group intact.

When we lost our hazardous waste permit fight with TXI in 1999. When we fought our Green Cement battles. When we debated taking on lead smelters and gas drilling in addition to cement kilns. Those were tough times.

But this year was among the most disheartening and frustrating… and hopeful and exhilarating. On Inauguration Day, the program work of the last five years centering on DFW smog evaporated with the installation of a hostile EPA. We then lost 50% of our board between January and July through moves, illness, and exhaustion. We weren’t sure we were going to make it to the end of this ride.

But then things started to happen.

15 brave souls signed-up for an inauguration of our own as we began the College of Constructive Hell-Raising as an experiment in cross-movement, cross culture networking. By May’s graduation, there was a consensus it was a successful one and we recruited at least one board member from its alumni.

Our “Science and Socializing” events in June attracted new blood, including young scientists and researchers that wanted to help with 21st Century high-tech air quality monitoring.

We conceived a new campaign centered on Particulate Matter pollution, a pervasive and potent toxin linked to everything from early death to learning disabilities. A toxin we can reduce exposure to without the permission of the EPA or State of Texas. We believe this effort will take us places no DFW environmental group has ever gone before: highway and urban planning, transit and housing policy, as well as the familiar ground of environmental racism and citizen empowerment. 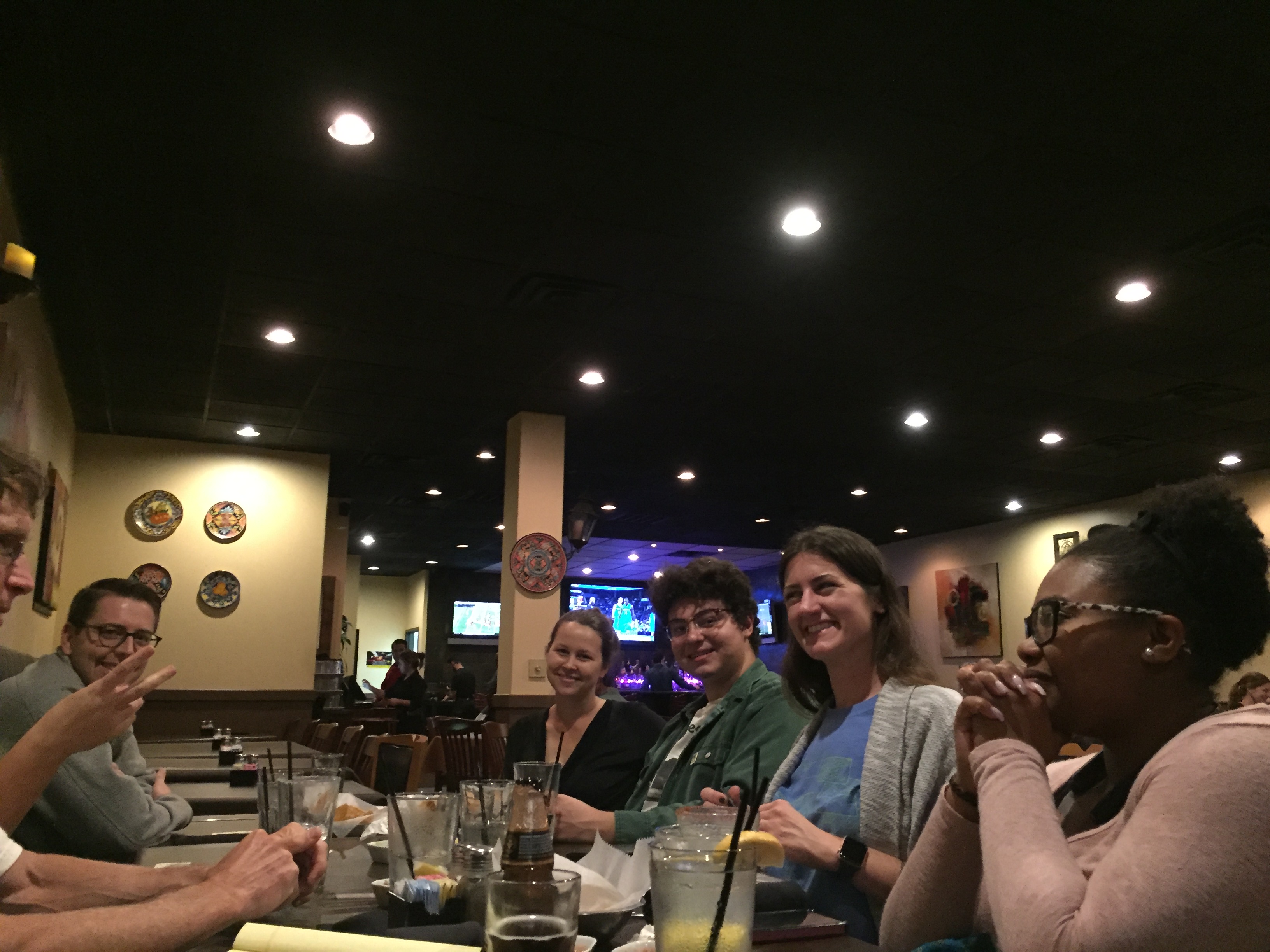 And we’re back to close-to-full board strength, with most of our new members a generation or two younger than the board members they replaced. Twenty somethings are almost in the majority now. We have a board member who was born the same year we were.

In short, Downwinders at Risk as reinvented itself…again.

There’s no better proof of that than what was going on a couple of weekends ago.

In Dallas, the newest members of our board were running the first meeting of our “No Safe Level” Particulate Matter campaign – without Director Jim Schermbeck anywhere in sight.

Meanwhile, in Austin, Associate Program Director Anthony Gonzales was meeting with Libertarian Party officials in an attempt to build a never-before-attempted bi-partisan grassroots alliance to advocate for more “local control” in upcoming Republican Primary races and the 2019 Legislature.

North, in rural Wise County, UNT graduate student Kari Nothiem was working to establish a location for our very own ozone monitor – in the only “non-attainment” county where the state still refuses to monitor for smog. It’s part of  a citizens network of new air quality monitors we’re working with UTD and others to establish across North Texas to replace the state’s obsolete system. 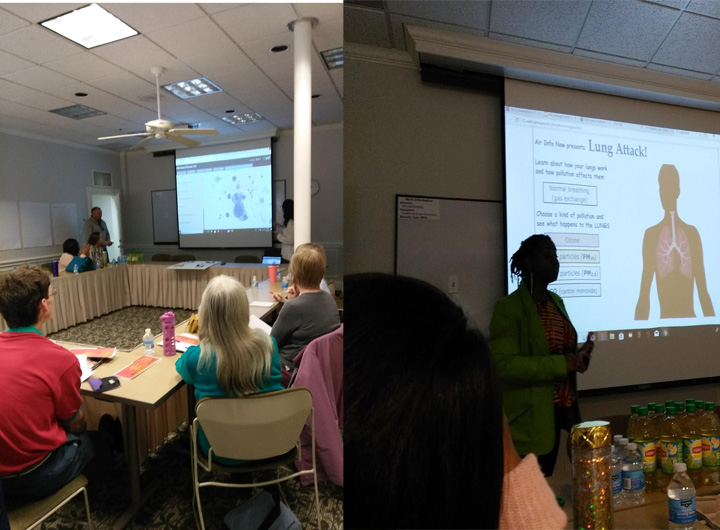 We hope you agree both the geographical and thematic reach of this new Downwinders at Risk is impressive for any group, but especially one that’s entirely dependent on DFW residents and resources. This is our home office. Your neighbors are our board members. This is our only work.

And if you’re reading this, you’re an important reason we’re still here. Even as our mission has broadened and deepened, you’ve been supportive. That’s taken a lot of faith at times. Thank you to each and every board member, volunteer, and contributor.

We started 2017 in suspect shape. We’re ending it with renewed vigor and optimism.

Batch plant permits in Joppa and West Dallas are due to show back up on the Dallas City Council Agenda in January. We’ll be there as part of our campaign to reduce PM pollution and argue that both communities need a bottom-to-top zoning review to better buffer people from pollution. 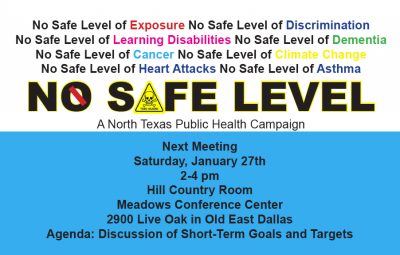 Those fights, plus transit system and school-based initiatives are on the agenda at our next No Safe Level campaign meeting on PM pollution scheduled for Saturday January 27th from 2 to 4 pm at the Meadows Conference Center 2900 Live Oak in Old East Dallas. All are welcome.

It looks like we might have our first vote on a new regional air monitoring network at Dallas Commissioners Court on January 16th – the first step to a truly 21st Century approach directed by local governments.

Later that same day, the 2018 class of our College of Constructive Hell-Raising begins meeting (late-comers still being accepted….)

And if everything goes as planned, we’ll be announcing the creation of a broad left-right coalition working to restore local zoning powers to local governments in Austin sometime next month.

We had a very good Giving Day this year and you may feel as if you’ve paid your clean air resistance dues for 2017. We understand. But if you like the direction the group is going and you want to do some early 2018 voting with your pocketbook, we could sure use the help as our work expands.

Thanks for your continued support and your consideration of a contribution to the cause we’ll try our best to serve for a 23rd consecutive year.