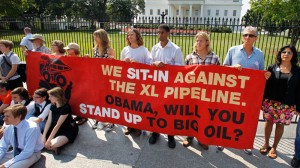 There's no doubt the anti-Keystone effort is the most successful climate change campaign the country has ever seen. Thousands have turned out for marches and candlelight vigils, it's sparked civil disobedience from the White House to East Texas, and created more political pressure for the President than any other single environmental issue.

That said, was it the right campaign aimed at the wrong target? Former NASA scientist's James Hensen's dire warning that it was "game over" if the pipeline got approved is an ultimatum that leaves the movement that it built no place to go once the decision is made. And with the opening of the southern section of the pipeline through Texas this past month, the hand-wringing over the State Department's luke-warm approval, and President Obama's final decision to support or oppose seems very anti-climatic.

The Houston Chronicle's Jennifer A. Dlouhy looks at the debate within the environmental movement over whether it was wise to put so much emphasis on a single project in this Fuel Fix article.

Opponents say the proposed $5.4 billion pipeline would be a catalyst to unlocking oil sands development in Alberta, Canada, where a dense, sticky hydrocarbon called bitumen is harvested by strip-mining and energy-intense steam-based techniques.

Environmentalists view the decision on whether to permit the border-crossing pipeline as a test of President Barack Obama’s green credentials and a symbol representing much deeper, more complicated climate-change questions.
Sarah Ladislaw, energy program director at the Center for Strategic and International Studies, said Keystone XL has become “a litmus test for where the country stands on a low-carbon pathway.”

“But my question is, what do you do after Keystone?” Ladislaw said. “Yes or no, it is not the last pipeline that will get permitted.”

Both of these pieces basically ask and try to answer the same question. A lot of money and infrastructure has been spent trying to define climate change with a single project. What happens to all of that once the Keystone decision is history?