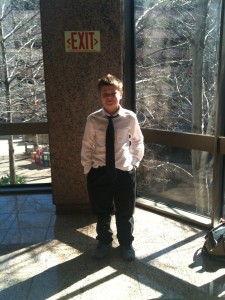 This is a picture of Robert Caney. Despite achieving the advanced age of 11, he was the youngest member of Tuesday's frakequake bus contingent to the Railroad Commission meeting in Austin.

Robert lives about four miles from the epicenter of the "swarm" of earthquakes that have plagued the residents who live along the convergence of the Parker, Tarrant and Wise county lines northwest of Fort Worth.

You've probably not met many 11-year olds like Robert. He brings new meaning to the word precocious. Without a doubt, he was one of the most articulate people in a RRC meeting room that was packed full of articulate storytellers on Tuesday. And he was also among the most direct among a crowd that doesn't mince its words.

"I have to say that the operations of these wells have to stop now," he lectured RCC Chair (and State Attorney General candidate) Barry Smitherman, and the other two Commissioners. "I want to know how you're going to solve this problem." The kid is alright.

Of course, Robert was media bait, but he had some strong competition in that category. There was Big Bill Hoffman, the Singing Quaker who re-wrote the lyrics to "All Shook Up" and accompanied himself on guitar – in the bus going down to fire up the troops, outside the meeting for the press, and even for his testimony in front of the Commission. Sources believe it to be first such instance of public testimony being sung in the Commission's 123 year history.

Then there was the unintentional comedy team of Stokes and Wood.

Reno (pop 2546) Mayor Lynda Stokes was the first speaker on behalf of the group and she went through the long litany of scientific, well-documented connections between injection wells and induced "earthquakes" that everyone at the Railroad Commission seems to want to not to admit exists. At the end she totaled up the evidence and made the common refrain that "It doesn't take a rocket scientist to see there's a link" between local injection wells and the 30-something quakes the area has experienced since November.

Several speakers later, up pops one Gail Wood, who it turns out IS a former NASA rocket scientist, and states unequivocally that, yep, you really don't have to be one to get this stuff. He brought down the house.

It was the political equivalent of the scene in Annie Hall when Woody Allen, while disputing a fine point of media theorist Marshall McCluen with a friend, is able to conjure up the real-life McCluen out of nowhere to bolster his argument. "You don't need a rocket scientist to know there's a connection. And to prove it, here is one."

Surrounding these speakers were lots and lots of the very kind of folks who probably voted a straight Republican ticket in the last election. The very kind of people that Smitherman is counting on to propel him into higher office. The very kind of people that Milton Rister, Governor Rick Perry's "ideological hit man" who's been imbedded at the RRC as Executive Director, usually counts on to beat back all those treehugging, industry-hating greenies. Only this time they were ones complaining about putting profits before people!

With bolo ties, western shirts, and Stetsons costuming the rhetoric, in many ways it was if Occupy Amarillo had shown up.

And therein lies the problem for the current Administration. These are not the usual suspects that can be dismissed for their ties to "kooky far-out" groups like Environmental Defense Fund and the World Wildlife Federation. These folks are their license-to-carry constituency.

So instead, the RRC has decide that there's just a big mystery here that, by gosh, we just can't seem to solve without more time to study this problem. Smitherman had a go at justifying the agency's inaction by saying the volumes pumped into the two wells closest to the epicenter of the quakes had decreased in the last couple of years – as if the previous years of high-volume pumping had never taken place. If your filling up underground spaces that you didn't know were there and don't know anything much about, hard to say what the tipping point is for setting off, eh Chairman?

But he also left some wiggle room about "faults we didn't know about" that, somehow geology textbooks seem to have discovered. We're making the bold prediction that the seriousness of these "new faults" at the RRC will be directly proportional to the hell that citizens can continue to raise going onto this next election cycle.

in the end, the whole day was an opening shot. By citizens, who invaded the RRC's home turf and had a successful media field day for their cause that keeps up the pressure, and by a desperate RRC shotgunning a load of responses, hoping one or more might be able to hit a target. Protocol was observed. Everyone was more or less polite. There were no citizens thrown out of the meeting this time, No unruly mobs. Yet. Stay tuned.