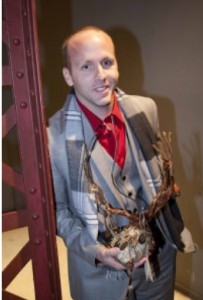 That's the question called out from the bathroom by his wife that finally put Ed Brown on the road to making a film about how many synthetic chemicals we're exposed to in our daily lives, often without our knowledge or consent. Brown's final product, "Unacceptable Levels," has its Dallas premiere the evening of January 30th.

At the time, the couple had recently gone through a second miscarriage. "We thought we'd been doing everything right this time – eating organic, staying away from second-hand smoke." They didn't suspect chemical assault by zit cream.

"The Clearasil question" prompted Brown, a former stand-up comedian and CBS Sports staffer, to begin looking at the ingredients of lots of different products we use everyday, including the water we drink. How was it legal to sell carcinogens in something people put on their faces? What was a "safe" dose of a cancer-causing substance, and how did we know it was safe?  He found the same pattern time and again – exotic chemicals included for mostly esthetic reasons that had almost no information about how they actually affected human health in the real world, being released on an unsuspecting public to mix and match in ways never predicted by anyone.

At the time, Brown was in the restaurant business. He had never made a film before. But using a camera he'd bought for family use, Brown became a one-man-video-band who went out and interviewed academic and industry experts within one-day's driving distance from his middle-Pennsylvania home about these chemicals. "I edited these clips into a two, three-minute trailer and began showing it to people I knew, who passed it along to people they knew. It eventually caught the attention of producers who wanted to help make the larger film and get it distributed. It was completely D.I.Y."

Brown is particularly concerned about how vulnerable women are to chemical exposure through personal care products and views moms as his film's primary target audience. "I think a lot of us look at a newborn baby and see it as a clean, completely unaffected child, but in fact we're having pre-polluted babies now, born with 200 or more synthetic chemicals in them. Science is telling us what's in them already could harm the health of their great grandchildren. Women are at greatest risk and because they're the child-bearers, but they're also putting successive generations at greater risk."

Changing the way things are done will take time. "It took decades for these chemicals to seep into the marketplace to the extent they have. It'll take decades to get them out." Instead of starting at the top of the bureaucratic food chain, he recommends pursuing change at the local level first. "Go to your neighborhood grocery store or drug store. Ask them to carry non-contaminated alternatives to these products. Ask the local water district why it has to put Fluoride, an industrial waste with no known benefits to dental health, into the water supply. Moms, when they're organized, have a lot of power in the marketplace. General Mills just took GMOs (genetically modified organisms) out of Cheerios because of moms."

When he does talk about wider changes in policy, he notes the attempted reform of the ancient Toxic Substances Control Act of 1976 and adoption of the Precautionary Principle as a gatekeeper for new chemicals. "There's no question that the current testing protocol for new chemicals is deeply flawed, with only a 90-day observation period, compared to multi-generational health effects we're seeing produced through the new field of epigenetics."

Brown spent 2013 picking up awards for "Unacceptable Levels" on the festival circuit and is using 2014 to roll out the film for general release later this year. He likens it to other low-cost first-time video guerrilla efforts like "Supersize Me" that captured wider audiences with word of mouth.

Now with three children, including a new five-month old, Brown has quit his restaurant job and is trying to make a go of it as a full-time filmmaker concentrating on subjects he cares deeply about. "There's no doubt that becoming a parent changes your perspective. These things are not something you think a lot about until you have kids." He's already at work on his next film: "Genetically Modified Movie."

Ed Brown's "Unacceptable Levels" will be shown at 7:30 pm January 30th at the AMC Valley View. Only a handful out of 230 tickets remain. They're $11 each. To buy them, visit the Dallas showing's own website. The film will be followed by a short panel discussion including Downwinders' Jim Schermbeck, Earthworks' Sharon Wilson, Texas Campaign for the Environment's Zac Trahan, and Susan Lee Pollard of the Texas Honeybee Guild.