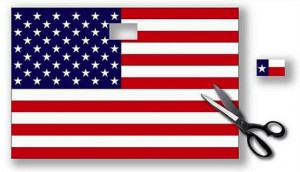 Many of you have already seen the increasingly urgent pleas from the usual suspects for people to show up at this Thursday's national EPA "Listening Session" on new emission standards for Greenhouse Gas pollution. Try to ignore the New Age-by-way-of-George-Orwell alternative name for a public hearing, and the industry-friendly "listening" schedule of 10 am to 3 pm, and concentrate on the fact this is one of only a handful of such sessions taking place nationwide, and it's in Texas, our Texas.

Like it or not, public health-minded residents of DFW have the burden of showing up to national hearings like this just to prove we exist. Nobody expects there to be an viable environmental movement in the Belly of the Beast, especially outside Austin. However hard we work to change that image, it's still a popular one and in this case, it hits entirely too close to home. Because Texas is the world capitol for carbon pollution. We're Numero Uno, A Number 1. We're living in the barrel of the gun that's pointed right at the planet's head.

EPA recently reported that Texas released more GHG pollution in 2012 than the next two states – Indiana and Pennsylvania –  combined. We're responsible for a full 12.5 % of the entire US annual total, almost 400 million metric tons of the stuff, ever year. Just take a look at the difference between us and the other 49.

Then use this handy-dandy EPA map of incredibly large sources of GHG pollution in the US. It allows you to zoom down to what's in each county of each state. Look at all the sources around DFW. Most are also large sources of other kinds of pollution. We're living in a sea of pollution created by these facilities.

So when EPA decides to schedule its one and only listening session in Texas on new rules to reduce this kind of pollution from some of the biggest sources in our own backyard, we need to show up because we're a disproportionate part of the problem.

We also need to be there because industry will be there, in force. The old TXU really wants to keep its obsolete, lignite-burning East and Central Texas coal plants running without any of these modern pollution control contraptions. Doesn't matter if they're aimed at Particulate Matter, or smog-forming pollution or GHGs, they just don't want them. You can bet they'll be bringing in folks from those coal plants to say what a terrible economic cost it would impose on the host communities and the company, and how it'll put the entire statewide grid in peril.

Someone has to be there to balance that testimony by pointing out that the economic, public health, and environmental impacts of this pollution reach far beyond Limestone County, Texas or even the US, and need to be considered on the agency's balance sheet as well.

Every yahoo with Americans for Prosperity, or other industry astroturf groups will be there because these kinds of national forums to bash Obama's energy policies are what they live for – and it's the only thin they do halfway competently. Likewise for the industry-aligned Freedom Works branch of the Tea Party.

And does someone want to start an office pool on how many Republican primary candidates will be appearing, trying to outflank each other on their Right? Expect to see and hear a lot about  "Obama's War Against Coal" on Thursday. It's Texas.

Which is why even if you're not a fan of this Administration, you have to recognize that the first attempt to regulate greenhouse gases from coal plants should be encouraged, in Texas. It's a foot in the door to do more effective things, to start talking about GHG regulations in a serious way. It establishes a precedent. And that is what industry fears the most.  You don't have to like the EPA to understand that the enemy of your enemy is your friend in this fight. And did we mention it's in Texas?

Finally, we just emerged from an ozone season that was mild by recent standards – but still harsh enough to keep us in violation of the old 1997 smog standard. We know the East and Central Texas power plants contribute to DFW's air quality problems. These new carbon regulations EPA is considering for existing power plants have the potential to reduce a variety of air pollution, not just GHGs. We know Austin and TCEQ are going to be of no help in addressing these sources in the next DFW clean air plan. If reductions are going to happen, they're going to have to be driven by the EPA, local governments, or the marketplace. We can't let this opportunity for meaningful reductions and better air pass us by.  If for no other reason, you need to show up on Thursday and say you support the EPA's regulation of these facilities because you've given up on Texas doing so.

For lots of reason, it's in your own self interest to attend this thing, even if you real passion is gas field pollution, or smog, or cement plants or whatever. A victory in this category of regulation is a victory for all of us involved in clean air issues. And it's Texas.