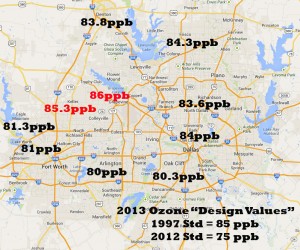 (Dallas)— On the eve of constructing yet another DFW clean air plan, the 2013 Ozone Season ended on Thursday the same way the previous 16 have ended: with North Texas out of compliance with the 1997 federal clean air standard.

Even a mild summer with lower temperatures and more rain couldn't save the numbers from exceeding an illegal three-year running average of 85 parts per billion at monitors in Keller and Grapevine.

According to Jim Schermbeck with the clean air group Downwinders at Risk, what makes this year’s violation particularly troublesome is that the 1997 standard has been replaced with a more protective one that's 10 ppb lower. “For the next DFW air plan to succeed, it will have to reduce smog to levels that no DFW monitors have ever recorded. I don’t know anyone outside of Austin who thinks the state is up to that task.”

That new plan has its official kick-off event next Tuesday, November 5th, beginning at 9am in Arlington at the Council of Governments Headquarters. It's the first briefing from the Texas Commission on Environmental Quality on the computer model it will be using to base the plan on. Everything about one of these plans is based on such a computer model, a model only the state can run. The plan must be submitted to EPA by June of 2015.

Even though extremely high ozone numbers were rarer this year, there were enough bad air days to cause the running averages of 10 out of 17 monitors, called "design values" to rise – not the kind of trend you want when you're next task is complying with a tougher standard.

Schermbeck was particularly concerned about a monitor near Mockingbird and I-35 in Central Dallas that’s seen its ozone average rise dramatically for three years in a row. “This is a monitor that had a "design value" of 67 parts per billion in 2010 – that is, it was in compliance with the new 75 ppb standard just three years ago. But now it’s up to 84 ppb and almost out of compliance with the 1997 standard. That's quite an increase in three years, and in a place where smog hasn’t been a problem for awhile.”

Every monitor inside the DFW metro area and even most "rural" monitors had a design value above the new standard of 75 ppb. Only Kaufman and Greenville made it under the wire, barely, with readings of 74 ppb.

As usual, the worst ozone levels were found in the northwest quadrant of the DFW area. This is a well-known historical pattern caused by the predominant southeast to northwest winds that blow pollution from the coast up through the coal and gas patches of East and Central Texas, over the Midlothian Industrial Complex and North Texas central urban cores into Northwest Tarrant Wise and Denton counties

This pattern has been the target of the last three state clean air plans, but has never been overcome.  Schermbeck noted that last clean air plan to make a dent was the 2006 effort that produced lower numbers in steady fashion. Since 2008 however, air quality that was supposed to be getting better has gotten worse, or stagnated.

While cars have gotten cleaner during this time, and pollution from cement and coal plants has been reduced, there's one "source category" of pollution that's increased significantly since 2008: the gas industry.

In submitting the last DFW air plan to EPA in 2011, the Texas Commission on Environmental Quality estimated there were more tons of smog-forming Volatile Organic Compounds being released by the gas industry in the official DFW "non-attainment area" than by all the cars and trucks on the road combined. That wasn't true in 2008.

Moreover, this is new air pollution in a smog non-attainment area that doesn't have to be off-set by reductions in pollution elsewhere in DFW. Unlike every other large industry, the gas industry is exempt from this offset requirement of the Clean Air Act.

Denton's Airport monitor's 4th highest reading of 85 ppb this summer, the one that officially counts toward its running average, was the highest such reading in the entire state, including Houston.

There's no doubt Denton is in the middle of the local gas patch, as are the Keller and Grapevine monitors that had the highest design values this year. Given the decreases in pollution from other categories, are gas patch emissions keeping these numbers from coming down they way they were supposed to? Austin keeps saying no, but the evidence is compelling.

Just last year there was a study out of Houston showing how a single flare or compressor station could significantly impact local ozone levels by as much as 5 or 10 ppbs. TCEQ itself just produced a study this last summer showing how Eagle Ford Shale gas pollution is increasing ozone levels in San Antonio.

Local Barnett Shale gas pollution might explain these Tarrant and Denton county monitors' problems, but they don't explain the rise in numbers of the Dallas monitors, since the wind during ozone season comes in from the south to southeast.

What new pollution is coming from that direction? Gas industry pollution from numerous compressor stations and processing plants stations in Freestone, Anderson, Limestone and other counties just about 90 to 100 miles south-southeast of Dallas. If one adds up all the emissions these facilities are allowed under their "standard permits." it exceeds the pollution from coal plants like Big Brown. That's a huge hit from sources that weren't there 10 years ago.

In effect, DFW is getting squeezed between gas pollution being produced in the middle of its urban areas, and gas pollution blowing in from the south.

“Officials with Rick Perry's TCEQ would rather drink lye than admit gas pollution is causing smog problems for DFW” says Schermbeck, “but such an admission might be the only way to bring DFW into compliance with the Clean Air Act.”

“This is why local DFW municipal and county governments serious about air quality must divorce themselves from Austin's politicized science and begin to seek their own solutions. Austin really isn't interested in solving DFWs chronic smog problems. Heck, the Commissioners who run TCEQ don't even believe smog IS a health problem.”