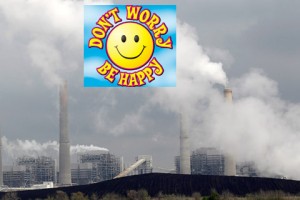 Feigning allegiance to some sort of science the scientists themselves don't use, the Texas Commission on Environmental Quality rejected a petition by the Dallas County Medical Society to put new pollution control equipment on three large coal power plants upwind of DFW, saying there's no real conclusive evidence that smog causes respiratory problems like asthma.

It may come as a surprise to newcomers, but the largest state environmental agency in the U.S. has never recognized a connection between ozone pollution, or smog, and respiratory problems. Austin has fought the implementation of every new ozone standard ever proposed by EPA and played down any causal link suggested by recent studies. If you want to know what's behind the current push in the US House of Representatives to discredit the historical "6-Cities Study" – the basis for the original connection between smog and public health, look no further than the Texas Commission on Environmental Quality, where such mainstream science has never been accepted. It's not in industry's interest, or the pro-industry-constantly-running-for-something Governor, whose fingerprints so besmirch the TCEQ these days, even new file clerk positions are considered ideological appointments.

“I’m convinced that it doesn’t make sense to get ahead of the science,” Shaw said. He later added, “I don’t want there to be this knee-jerk reaction.”

That would be Bryan Shaw, A&M Poultry Science major, and Toby Baker, A&M Public Administration major. Both of them have the same amount of expertise in medicine and public health, which is to say none. But that doesn't stop them from discounting the doctor's own experience with layers of condescension.

But the Commissioners had an answer for that concern too: just wait for our next DFW clean air plan! In 2015! To address smog problems that don't worry us at all! That will be just as effective as the last one! Which ended with higher ozone levels than when it started! Which is why we definitely do not need to better control the air pollution from big, obsolete coal plants!

See how that little bit of misdirection works?

The only way DFW will ever see real clean air progress while Rick Perry's TCEQ is in charge is if local governments do it on their own. No amount of professional public health concern is enough to outweigh the total Rick Perryization of the agency. Not even when it comes from 7000 Dallas County doctors.

Meanwhile, good on Public Citizen, Dr. Haley, and the Dallas Medical Society for creating the most high-profile intervention to date into DFW air pollution politics by the local medical community.  And we'll hold Haley to his promise that the group is going to "continue to push for cleaner air," because folks could sure use the help – and not just with East Texas coal plants. Soon they'll be meetings of the North Texas Clean Air Steering Committee to discuss that next TCEQ air plan for DFW. It's a local air policy committee with no health professional as a member. Perhaps The Dallas Medical Society would like a seat?

And on Thursday November 7th, the EPA is hosting what it calls a "listening session" on proposed new rules for carbon emissions from all power plants including the East Texas coal-powered ones, at the downtown Dallas Library from 10 am to 3 pm. Implementing these rules would most likely internalize too many of the costs that are being absorbed by the environment now for these dinosaurs to keep operating profitably. So even though the docs lost the battle in Austin on Wednesday, the war is still capable of being won. Stay tuned.