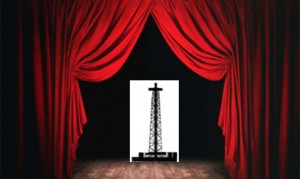 Act I was the rear-guard fight to keep the horrible Trinity East permits from getting approved.

Act II has been about getting the most protective ordinance language for any future drilling we can from the members of the Dallas Plan Commission.

Act III will be about what kind of new drilling ordinance the Dallas City Council actually passes into law.

This Thursday at Dallas City Hall, Act II will come to a close with the final workshop and public hearing by the Plan Commission on a new Dallas gas drilling ordinance.

As usual, the public hearing is slated for 1:30 pm in the Council Chambers on the 6th floor. Immediately afterwards, the Commission will vote to send a draft ordinance to the full City Council.

Why is it important for you to come to this last hearing? Still pending or being reconsidered by the Commission is final language on park drilling, drilling in flood plains, insurance and bonding requirements, chemical disclosure requirements, and adding a 1500 foot setback to compressor station permits.

Because we don't know how many City Council members actually support building the most protective ordinance in the Barnett Shale, we must try to get the strongest language now at the Commission level, so that we have the momentum heading into Council consideration.

Council members are less likely to weaken strong provisions already written in by the Commission. On the other hand, any weaker provisions  will likely be left weak unless citizens campaign for changes. So the draft of the ordinance submitted by the CPC on Thursday will be a very important starting point for the Council.

Make no mistake, your presence on Thursday is important and being watched. When you show up,  you're saying you want a strong ordinance. By staying away, you're telling the Powers That Be that you'll set this round out. Don't let that happen at the exact moment industry is beginning to realize what we're accomplishing in Dallas. The ratio of drill, baby, drill proponents to citizens who want more aggressive protections crept up at the last public hearing on the 12th. Don't let it get any higher. We need you on Thursday to give a rousing send-off of the proposed draft ordinance to the Council.

Specifically, we must use the recent flooding of the gas fields in Colorado to call for a complete ban on drilling in the flood plain, or at least require those pad sites to be fully elevated out of the flood plain. Currently, only the rig must be elevated, leaving storage tanks and other pad site equipment vulnerable. Given what we've seen in Colorado, it'd be a big mistake to keep it that way.

What basic protections do we need in this ordinance?

1) A 1,500 foot setback for well pad sites from neighborhoods and other "protected uses."

2) COMPLETE disclosure of all chemicals used or stored on a well pad site – no exceptions for trade secrets.

3) A ban on drilling in parks

4) A complete ban on drilling in flood plains, or a requirement that the entire pad site must be elevated out fo the flood plain

5) Making sure the 1,500 setback from neighborhoods and other protected uses applies to compressor stations in addition to well pad sites

6) A ban on using City of Dallas water for fracking during droughts, and charging more for water used for fracking, since it's being permanently taken out of the hydrological cycle.

One last public hearing at the Plan Commission this Thursday and then it's all up to the City Council. Come and make sure it's a happy ending to Act II. And if we do well, we hear there's a special movie night on Friday to come and celebrate what we hope will be the most protective gas ordinance in the Barnett Shale.