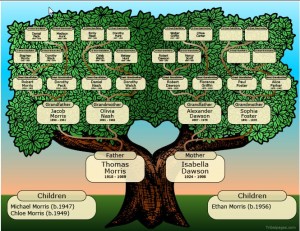 And the evidence just keeps piling-up that we have no clue about the public health impacts of poisoning ourselves.

Over the past few years, more and more science dollars have been committed to studying the "epigenetic" impact of toxins in the human body. These are impacts that go well beyond just the person originally exposed to those toxins. We expect that harm. What's brand new is the fact that that exposure can keep harming the descendants of the original victim. His or her children could be impacted, or his or her grandchildren, or even great-grandchildren. Individuals who might be born long after the offending facility is out of business can nevertheless still be impacted by its poisons as the get passed along from generation to generation.

This happens not through direct DNA damage, but by damaging the code and behavior of the stuff surrounding the DNA and telling it what to do. This damage can cause a normal cell to go haywire. Changes can be subtle or dramatic. Maybe cancer, maybe a immune system disease, and maybe asthma.

Researchers at the UCLA Medical Center have published a study that concludes that mothers who smoke during pregnancy have a statistically higher risk of causing asthma in their great grandchildren.

"Even though there are multiple causes for childhood asthma, research linking this serious chronic condition to maternal nicotine exposure during pregnancy for up to three generations should give mothers-to-be even more reasons to reconsider smoking,’ said Dr Virender Rehan an LA BioMed lead researcher. "

Smoking is bad for you. Smoking is bad for your kids. Smoking is bad for your grandkids. And now smoking is bad for your great grandkids.
But if you think it's just nicotine and smoke that causes these kinds of "trans-generational" effects on humans, think again. There are 80,000 different chemicals on the marketplace, only a couple of hundred of which have ever been thoroughly studied, and none of which have been thoroughly studied for their potential to cause epigenetic harm in future generations. And yet scientists are discovering that the more of these chemicals they look at, the more they find things at the molecular level they weren't expecting.
This is one more reason why we need a new way to protect public health from poisons in the air, water and food. Our current model is based on only a smidgen of understanding of how the human body works, left over from the earliest ideas about toxicity – that turned out to be totally wrong. New science demands a new process that accounts for epigenetics and other new phenomenon – like the fact that there doesn't seem to be "safe" levels of exposures to a lot of chemicals. Delay in adopting a new regulatory scheme for limiting our exposures means more and more victims, many not even born yet. Concerned about the unborn? Stop injuring them with industrial poisons.
Posted in Air Quality, Toxicology