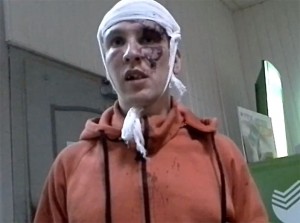 Midlothian? No, Frisco? No, Barnett Shale? No.

Russia. Where taking samples of illegal toxic contamination can get you fatally beaten by thugs instead of headlines and news coverage.

After three men in this heavily polluted city beat Stepan Chernogubov unconscious, fracturing his skull and knocking out three teeth, criminal investigators took him, still bleeding, to a police station where they questioned him for four hours and then threatened to bring charges against him.

Chernogubov had been set upon as he was trying to document the pollution streaming from a chromium plant here, pollution that occasionally turns a marsh feeding the Chusovaya River dark red, next to a waste pond that’s bright green. At least two of those in the fracas turned out to be plain-clothes police officers, he said in recounting the May incident.

The 26-year-old student knew the risks. Environmental activism in Russia attracts serious trouble. A forest advocate in southern Russia, Suren Gazaryan, criticized a governor, was thrown in jail and has now fled the country. An editor who campaigned against a highway project through a forest near Moscow, Mikhail Beketov, suffered brain damage in a 2008 beating, and recently died from his injuries.

In the southern region of Voronezh, three activists organizing against the opening of a lead and nickel mine were hospitalized in May after private security guards set upon them.

In this case, the environmental movement is fueled by intense nationalism, you know, like a Russian Tea Party, by residents who  consider any modern Moscow-based government just another bunch of tourists passing through the ancient homeland of the Cossacks.

A lot of us have wondered what happened to a similar nationalist strain in environmental politics that motivated Republicans like Teddy Roosevelt to create parks and save natural area in the country. Back then, these ecological marvels were part of "American Exceptionalism" – the country was uniquely blessed with a wide spectrum of climates and topography that should be recognized and enjoyed forever by all Americans. Environmental wonders were seen as symbols of the nation's strength and Providence's bias. Destroying these American treasures was seen as an attack on God's blessing to the country.

But maybe the Koch's have bought all that sentiment out.