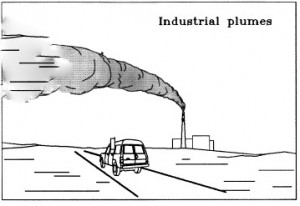 If you live downwind of a state line in the US, you're more likely to breathe the wastings heaved out by heavy industrial air polluters according to a new study reported on by the Washington Post today.

University of Georgia, Georgetown, and University of South Carolina political scientists collaborated on the findings, which document "State Line Syndrome, i.e. when large air polluters are disproportionately likely to be located near downwind borders instead of sharing the burden with more interior locales.

This is not a new phenomena. Lots of case law has been made by one state suing another over cross-border pollution issues. About a decade ago, the Midlothian cement plants were cited by Oklahoma and Tribal Authorities as a statistically significant contributor to haze problems at the Wichita Mountains Wilflife Refuge in the western part of he Sooner state.  However, what the new study shows is despite the lack of no logistical reason for many large air polluters to be located near a border, that's where they're concentrated anyway. The result?

"…the farther a location is from a downwind border, the lower the odds that it will host an air polluter. For instance, being about 100 miles upwind of a state line reduces the odds of an air polluter locating there (compared to a hazardous waste facility) by around 6 percent.

The effect is also strongest among the biggest polluters. The facilities that release the most toxic emissions (measured by number of pounds) are the most likely to locate near a downwind border."

But what's at least as interesting to citizens as the confirmation of concentrations, are the motives the professors hypothesize for allowing or designing these concentrations by state government:

"One is that state policy makers encourage it. For instance, Texas would surely want the economic development and tax revenue that would come from a new manufacturing plant. But the state could probably do without the resulting toxic emissions. So one option would be to encourage a manufacturer to locate on Texas’ northern border, where the wind tends to blow across the Red River into Oklahoma.

Alternatively, companies might decide on their own to build a facility in a location where pollution would be carried across state lines. Doing so might reduce the effectiveness of NIMBY, or not-in-my-backyard, activism. If the citizens who feel threatened by a plant live across the border, they may have a hard time persuading lawmakers in the facility’s state – who have little incentive to attend to the concerns of out-of-state residents – to oppose its construction or operation."

That's sounds like the paranoid ranting of a angry housewife or two we've met over the years. And it probably gives Texas officials too much credit for caring about their own airshed. But it does once again show the impossibility of trying to solve air pollution on a piecemeal basis rather than taking a firm and aggressive federalist approach to the problem. What if we dealt with infectious diseases the way we do air pollution – refusing to recognize the transport of the harmful virus across local or state lines? Science has amply demonstrated that we do all indeed live downwind. Time for policy to catch-up.