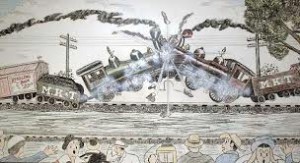 Coming down the hill from the west is a freight train full of woe for Exide. It's carrying at least five shareholder lawsuits aimed at the company for not disclosing its environmental liabilities, including those stemming from the operation of its Vernon, California smelter. That would be the same smelter California state officials shut down due to leaking lead waste and an unacceptable cancer risk to over 100,000 local residents. On board is a "restructuring specialist" who is supposed to see the company through its second bankruptcy in a decade. As of last week, Exide stock was selling for a cool 75 cents a share. The whole company is about to shoot off the rails.

Meeting it head-on coming from the east is the Exide's smelter site in Frisco, over 100 acres and fifty years of sloppy handling and disposal of hazardous lead, arsenic, cadmium, dioxin and other poisons. There are "pre-RCRA" sites aplenty – meaning they were there before any regulations could catch up with them, as well as more recent disasters like the illegal burying of hazardous waste in a non-hazardous landfill. Just last week the City of Frisco released a preliminary environmental assessment of the LEAST-contaminated parts of the smelter that revealed new potential contamination as well as the fact that the entirety of Stewart Creek had been re-routed around the smelter in 1964 – leaving the original channel underneath the MOST contaminated part of the smelter. Moreover, even though the smelter closed in November of last year, it's been routinely causing high levels of lead air pollution from the demolition and closure operations going on.

Caught in the middle are Frisco residents who just want to live without a lot of lead in their air for awhile, and don't want to see a new Superfund Site in their town. The state's Texas Commission in Environmental Quality is in its usual "Yes Man" role to industry and seemingly finds no fault in any of Exide's plans to leave pits and landfills full of smelter waste in Frisco permanently. Having made its sweetheart deal to close the smelter, the City of Frisco has taken a back seat to the company and TCEQ when it's come time to figure out how best to clean-up the site.

Thursday night Exide is sponsoring another one of its "community meetings" in which the community is invited to come hear company representatives put nice spin on everything as well as duck questions about its financial responsibilities and long-term plans. It's no substitute for a real public meeting but its the only game in town for Frisco residents who don't want to see a toxic waste dump site remain downtown.