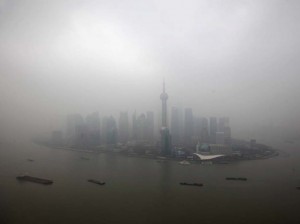 Is this what happens when all the polluters "move to China?"

Earlier this week, a consortium of entities, including the US EPA , the car industry and an assortment of research institutions released a study estimating that Chinese air pollution caused over 1.2 million early deaths in 2010 alone, or almost 40% of the world's total.

In this case, the villian is Partciulate Matter, seen by scientists as an increasingly serious health threat because of the variety of problems it can cause, from heart trouble to Parkinson's-like brain damage.

This new study arrives at a moment in history when much of the Chinese population is waking up to how bad their air is. Blocked from discovering official meaurements of pollution, citizens are pooling their resources and buying their own monitoring equipment. Unable to fight permits, residents often turn to direct action to shut down an plant. These days, some of the most radical environmentalists on the planet are often Chinese middle-class parents.