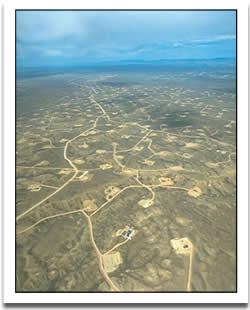 98 to 99 percent of the Volatile Organic Compounds (VOCs) and 57 to 61 percent of the Nitrogen Oxide (NOx) found in Utah's Uninta's Basin are emitted by gas drilling or production sources, and are responsible for worsening smog there, according to a new Utah Department of Environmental Quality study of air quality there.

The Basin is one of several large rural Western areas of the country that also includes stretches of Colorado and Wyoming where gas drilling has caused the phenomena of "wintertime ozone," creating smog as bad or worse than Los Anageles or Houston.

Despite low snowfall this year, the Basin has still seen more than a dozen episodes of high ozone so far. The ozone readings can reach nearly twice the limit considered safe by the EPA and last for weeks at a time. In 2011, levels reached 139 parts per billion, nearly double the federal health standard. About 1,100 wells were drilled that year.

Leaks from pipes and tanks and fumes from pumps, dryers and compressors were major sources of volatile organics. Drill rigs and fracking were sources of nitrogen oxides and methane, according to the study.

While making no recommendations,the report did say that reductions in certain kinds of volatile organic compounds, including benzene and toluene, “could be particularly effective since they are not only a direct health concern but are more active in ozone production than many other” VOCs.