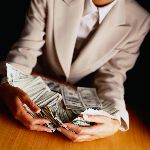 Only 12 cents out of every dollar collected in DFW to pay for anti-smog initiatives actually goes toward cleaning the air, according to representatives of the North Central Texas Council of Governments quoted in a new Texas Observer article.  Most of the money collected goes into the State's general fund to pay for other state programs.

Texas residents pay a small fee whenever they transfer a vehicle title or get their car emissions tested. Those fees are add up into big money every year – an estimated $772 million over the next two years. That funding is supposed to assist low-income families to get their cars repaired, and to help businesses purchase cleaner on and off-road engines. But only about $134 million is actually targeted for those clean air measures in the state's smoggiest areas – DFW, Houston and Austin-San Antonio. Everything else will be diverted according to a proposed state budget.

It's not like we don't need the money. For the last two years, DFW smog has gotten worse, and we're in our second full decade of failing to meet the Clinton-era smog standard even as we're looking at a 2018 compliance date for a much more stringent one implemented by the EPA last year. That means we have to have to go three years without exceeding that standard at any one monitor – beginning in 2015. That's not very long from now and that's why that money is needed now.  Not surprisingly, local government officials are a little upset.

“Our local and elected officials see it as county money that’s not coming back to the county,” said Shannon Stevenson, program manager at the North Central Texas Council of Governments.

The Capital Area Council of Governments, an association of ten Austin-area counties, has considered a plan to opt out of the program altogether, said Adele Noel, air quality project manager for Travis County.

“Honestly, we cannot operate if they do not give us more money,” Noel said.

So the North Central Texas COG is teaming up with other local governments in the state's largest urban areas and trying to redirect the anti-pollution funds back to their original purpose. With so many members of the legislature from districts affected by the funding shortfall, you might think they stand a good chance. But those other programs that get the money now also have their advocates, and not every member of the Lege from an urban county is necessarily sympathetic to clean air concerns. Stay tuned.