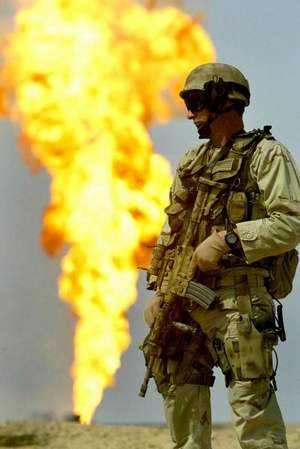 The story is behind the DMN's paywall, but there's a new piece of the Gulf War Illness puzzle that's been provided by UT-Southwestern researchers lead by Dr. Robert Haley, and it has some relevance to those who think their own health problems can be traced back to chemical exposure.

Originally dismissed by many to be only a psychological condition, scientists now suspect that the multiple and varied symptoms reported under the Gulf War Illness category are from exposure to one or more toxins at levels that were supposed to be safe. Dr. Haley and his colleagues at UTSW recently published the results of a study that proves that nerve damage is the common denominator that impacts breathing, heart rate, sexual function, perspiration and other body functions associated with the diagnosis.

For the Chemically-Sensitive among you, or those of you living downwind of a polluting facility, see if this doesn't sound familiar:

“Many of these veterans have been told that there is nothing wrong with them,' Haley said Monday in an interview. “

"There can't possibly be anything wrong with you because the levels of poison you were exposed to were so low, we don't estimate that you'd be harmed by them at all."  That's the mantra of the State's environmental and health agencies every time someone from Midlothian calls and says cement plant pollution made them sick. Same thing if you live around a gas well or compressor. They start from the smokestack or flare and work their way back to the person.

It's not an epidemiological argument. It's a lazy calculation based on laboratory science that's either old or doesn't exist. As the recent federal ATSDR report on Midlothian air pollution admits, science is still at least a decade away from being able to recreate the effects of being exposed to a multitude of pollutants at the same time, as so many of us are subjected to these days. We don't know, and we still can't calculate what it's like to live in a toxic soup.

Haley's studies and others start with the person and work their way back to the chemicals. They find "physical disorders" in a much higher proportion than a random sampling and seek to explain the cause. In this case, there is a match between those who have Gulf War Illness and a certain kind of pervasive nerve damage that can affect a wide range of bodily functions.

Having established that the symptoms of the Illness are indeed physiological, and not just in the Vet's heads, Haley sounds as if he is on the verge of releasing a much larger, longer-term study on the actual trigger mechanisms that produce the nerve damage he's identified.

"Haley suggested that he may soon address the cause, or causes, of Gulf War illness. 'We’re going to show proof of what causes this,” he said. “It will be a huge study with convincing evidence.”

That will be the headline-maker, because as the DMN article points out, Dr. Haley and the UTSW team have been narrowing the suspects down over the years and have a theory:

"He and other medical experts have repeatedly said they believe Gulf War syndrome was caused by exposure to pesticides and other chemicals in the Persian Gulf."

It's very possible that in the next 12 months we'll see the best study ever done on Gulf War Illness reveal that exposure to a variety of different kinds of environmental contaminants at supposedly "safe" levels has left 200,000 service men and women medically damaged. If that's the case, then it could turn out to be one of the most profound challenges to the toxicology of the status quo in the last 50 years. Stay tuned.