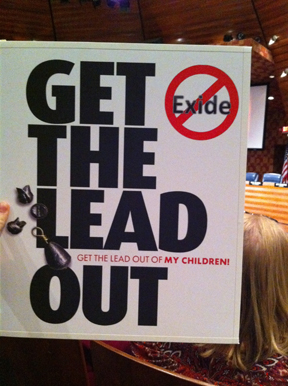 Sometimes, all it takes is the slightest push of an index finger, or a focused exhaling of breath.

Sometimes the house of cards is so precarious, so unstable, that any challenge, no matter how slight, can send the established structure to the ground.

A year ago a small, newly-formed citizens group that had just staged its first action was struggling to convince the City of Frisco to quit supporting co-existence with an outlaw lead smelter and instead kick it out of town.

Today, that smelter will stop operating.

Community activism rarely pays off as quickly or as spectacularly as it has with the curious case of the Exide lead smelter. But when it does, it's reason to pause and give thanks and remind ourselves that such things are still possible.

Because truth be told, this historic effort was directed by a group of Frisco residents that was never larger than 10 people strong. Please just think about that. Less than a dozen people challenging their local status quo are responsible for this huge victory for public health.

Downwinders' often tells its supporters that, like the Woody Allen quote about life, 90% of social change is about just showing up. The system so often goes completely unchallenged, that you'd often be surprised what happens when you just show up and start asking embarrassing questions. When you start poking at the house of cards.

As their campaign proceeded, this small group of committed people attracted the support of hundreds, and then thousands of their fellow residents. They forced the city to see the contradiction between the continued operation of a circa-1960's smelter and the reality of 2012 Frisco. They held up a mirror and re-framed the relationship between smelter and town. And the contradiction was so great, so at odds with the new perception of Frisco, that the established political support the smelter had enjoyed in town for decades dried up. Young couples with kids concerned about a lead smelter they never heard of before outnumbered Good Ol Boys in City Hall and the Chamber of Commerce. The old establishment was undone by the very demographics of change they'd unleashed a decade or so earlier.

There is still much work to do. A half-century of contamination blankets the smelter site, as well as an undetermined number of off-site "hotspots." Exide wants to leave a permanent landfill behind in the middle of Central Frisco, while the City is breezing along with plans to turn a piece of land right across the street from the smelter site into the city's largest park. Downwinders will be helping citizens monitor the cleaning-up of the smelter site for at least the next two years.

But as of today there is no more lead pollution coming out of the Exide smokestacks. No more daily fallout of poison. No more new layers of lead being laid down in the topsoil of Frisco. That is a pretty remarkable thing considering where we were 365 days ago.

So raise your glasses tonight to the hardy folks of Frisco Unleaded and the improbability of the impossible happening in record time. Here's to Colette McCadden, Henrik Ax, Shiby Matthew, Matt Vonderahe, Jeannette Sandin, Meghan Green, and Eileen Canavan, all residents who decided they would stick their neck out and start showing up and asking questions, much to the consternation of the Powers That Be. May they all have Frisco parks, and schools, and streets named after them.

It's not always this easy, but the fact that it was this time should give us hope about the power of pushing back.