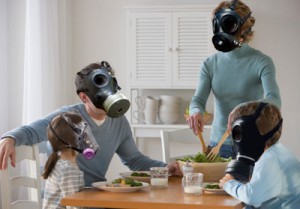 The winds found DFW again on Thursday night around 8 pm or we might have seen triple digit ozone concentrations up until the late news came on.

10 monitors recorded numbers that were among their four highest readings of the year. 9 recorded exceedances for the 1997 85 parts per billion ozone standard.

Rockwall had the day's highest readings by far – with an 8-hour average of 109 ppb, followed by Greenville with  97ppb, with Dallas Executive Airport (Redbird), Hinton Street, Arlington and North Dallas monitors all recording concentrations in the 90's.

For two monitors – Arlington Airport and Executive Airport – those exceedances were their fourth, and so official, violation of that '97 standard. That makes five monitors in 2012 that have crossed that line so far, and we're not out of August yet. Three more monitors are only one more bad day away from reaching the same place.

We'd already officially failed meeting the 1997 standard back in June to maintain our "non-attainment" status with the Clean Air Act for the 21st year in a row. Now we're just seeing how bad that non-attainment is this year.

One more thing. The two monitors that have historically been the hardest to bring down to legal levels – Eagle Mountain Lake and Keller – are not among those five 2012 non-attaining monitors to date, although they're on the brink. Both are located in the Northwest part of DFW. For a couple of years they were the only monitors that were in violation. This was taken as a good sign, because illegal levels of smog were confined to that corner of the Metromess that was downwind of everything in DFW, at the tail end of the ozone-producing process. It was thought if we could just get these two monitors in compliance, we'd finally see safe and legal air in DFW.

But as of August 10th, all five violating monitors are located to the east, or upwind, of these Eagle Mountain Lake and Keller monitors. The violating monitor furtherest east –  Hinton Street at I-35 and Mockingbird –  hadn't tripped since 2005. This year it was the first to go over the cliff. That's an indication that things are not proceeding as planned.

Last year we had the worst summer for ozone since 2007.  But it was a year of record-breaking drought, and you could have plausibly used that condition as an excuse to claim an exception. This year, the drought was broken, but air quality continues to deteriorate. We're going the wrong way, but no one in officialdom will say so.