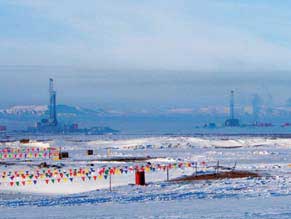 Last week five groups, including Utah Physicians for a Healthy Environment, EarthJustice, and the Southern Utah Wilderness Alliance sued the EPA for not classifying the Uintah Basin as a "non-attainment area" for the new federal ozone standard despite having plenty of evidence that the gas mining region is routinely experiencing some of the worst smog in the country.

"It was once considered strictly a summertime problem in big cities. But winter pollution readings from the oil and gas fields of Wyoming and eastern Utah in the past seven years have shown the pollutants that create ozone— nitrogen oxides and volatile organic compounds — can also cause problems in snowy, rural areas.

Monitoring data in the Uintah Basin collected between 2009 and 2011 shows violations of federal health limits on ground-level ozone, which are set at 75 parts per billion.  In 2010 and 2011, ozone levels rose as high as 121 parts per billion and 139 parts per billion, respectively."

To most of us this would mean the area is indeed due a non-attainment designation and should be required to draw up a plan to bring smog levels down. But to EPA, this only means the area is "unclassifiable," and it can put off that planning. That's why the groups are suing. And that's why it doesn't pay to think the EPA is taking care of everything.

But think about how this situation tests the claims of the gas industry operators.

In a previously pristine environment, without any cars or other kinds of heavy industry, they've now created smog on par with Los Angeles and Houston in the middle of extremely rural Utah…in the wintertime! They say they don't need new regulations; that they can voluntarily apply pollution controls. But in Utah, they either haven't done so in sufficient numbers, or those controls are clearly inadequate. Something more is needed than just voluntary controls.

Something like off-sets that require you to reduce as much air pollution as you spew.